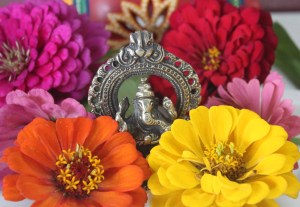 Pillayar Chathurthi, Ganesh Chathurthi or Vinayaka Chathurthi is being celebrated today. The Gods we worship have different names in different parts of India. Pillayar in Tamilnadu is also called as Ganesha or Vinayaka, followed by a list of many other names. Different names don’t interfere in the festivities on the street and inside homes.  What the elephant-headed God, being Pillayar or Ganesha likes is fixed – Kozhukkattai in Tamil and Modakam in Sanskrit. Different Forms of Modak are the most important preparation of Pillayar Chaturthi.

Added to the well popularised Modakam in the God’s hands, is a long chain of local ingredients – fruits, vegetables and grains that come up during the season.

In Tamilnadu, what Lord Ganesha is simplified in the poetic verses – ‘Appamodu Aval Pori’ – which gives the best three things that he likes to eat –

a. Appam/Deep fried Rice flour-jaggery Dumplings (the altered version being made with wheat flour and sometimes banana too)
b. Aval – Flattened Rice
c. Pori – Puffed Rice.

This also shows the socioeconomic connection behind these religion based celebrations. The major crop of the area – Rice and its different versions, has been adapted as ‘Festive Food Essentials’. I often think, if Ganesh Chathurthi had been celebrated elaborately in the northern parts of India – Wheat based specialities would have been his favorite, wheat being the major crop of that part of the country.

Now, the core ingredient of Kozhukkattai or Modakam is the rice flour. What enters into the beautiful rice cover can be optional. Coconut – Jaggery is the ultimate killer combination of all kozhukkattais according to me. The next classic filling is the Sesame Seed – Jaggery combination. The nutty flavor that the sesame seeds give and the traditional sweetness from jaggery can also be a low-fat version for those who feel coconut or fried coconut is rich in cholesterol (not me). Apart from this stuffed modakams, there are also varieties of non-stuffed stuff – pidi kozhukkattai or plain sweetened or salted steamed dumplings pressed with the impression of fingers – that aid additionally as quick and easy evening snacks. 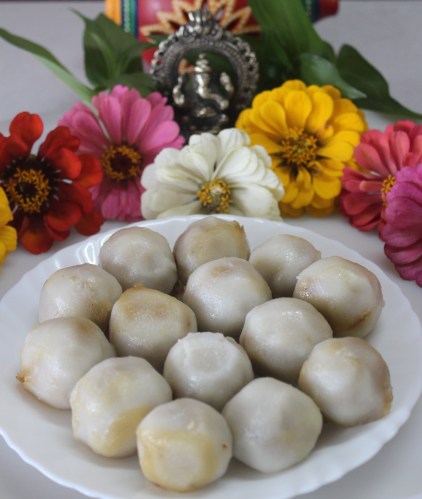 a. Ingredients specified below makes 20-25 dumplings

b. The V -Part demonstration is for precise comprehension alone – otherwise these dumplings are quite easy to make

Part I – Making Rice Flour at home
The core ingredient Rice Flour can be store-bought which comes out well, but the snow-white colour of home-made rice flour is something beyond comparison. For those who prefer home-made rice flour, please refer https://dosaikal.com/2016/08/29/uppu-seedaisalted-rice-ball-crispies/
Part II – Making the Rice Dough which is the outer covering 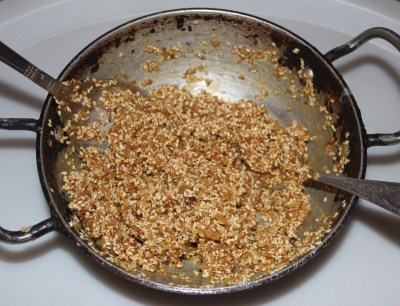 and shaped to be filled.. 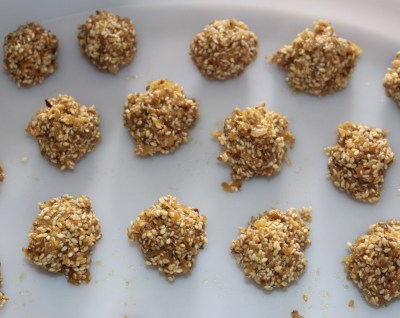 (for step-by-step procedure for keeping the filling inside and closing kozhukkattai please refer – https://dosaikal.com/2011/09/14/modhakam-pillayar-chaturthi-special/

ready to be steamed 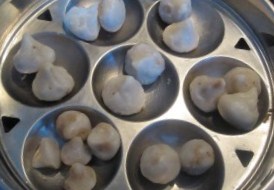 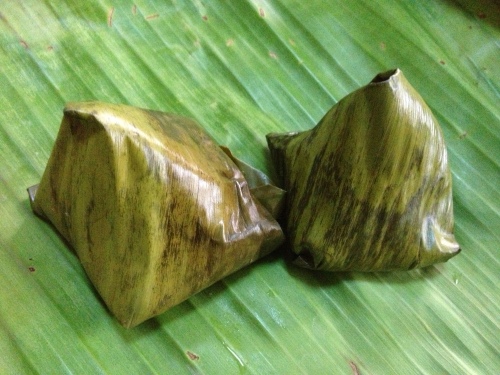 Cambodia with the staple food rice has many varieties of food made with Rice, especially the Glutinous Rice or the Sticky Rice.

Glutinous rice (Oryza sativa var. glutinosa; also called sticky rice, sweet rice or waxy rice) is a type of rice grown mainly in Southeast and East Asia, which has opaque grains, very low amylose content, and is especially sticky when cooked. It is called glutinous (< Latin glūtinōsus)[1] in the sense of being glue-like or sticky, and not in the sense of containing gluten. While often called “sticky rice”, it differs from non-glutinous strains of japonica rice which also become sticky to some degree when cooked. http://en.wikipedia.org/wiki/Sticky_rice 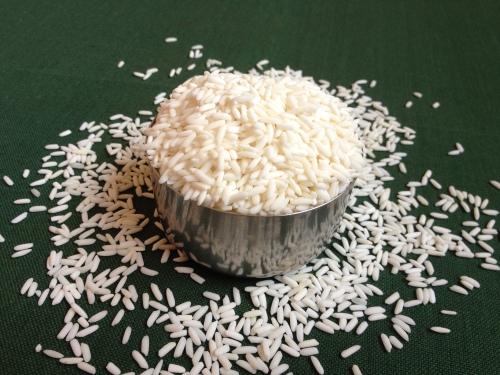 Some of the main delicacies made for special occasions with the Sticky Rice are the different kinds of Rice Cakes. Special occasions can be Weddings, Khmer New Year or Pchum Ben (Festival devoted to worship of ancestors).

During Pchum Ben – where the ancestors of every family are worshipped – women of the household, young and old sit together and prepare Num Kom.  The Rice Cakes require a lot of time wrapping them in banana leaf – folded in a particular pattern.  While Num Kom – the coconut filled rice cake needs less time comparitively,  there are other fillings to the rice cake – like pork meat – cooking time of which is longer. So, they say the womenfolk sit chatting in the night making hundreds of rice cakes, while the different kinds of cakes get cooked for the next day ceremony.

Thanks to http://blog.aseankorea.org/archives/16079 – from which I could collect some interesting information about these Rice Cakes.

And all those other friends who may be reading this – do correct me when I am wrong on information – and please do not hesitate to share your thoughts. This would help me get a better insight into the traditions and culture behind the cuisine of Cambodia!

This Rice Cake could not have been prepared without the guidance and helping hands  of friend ‘D’, who played teacher in letting me learn this cake – with the taste and twist (literally) of banana leaves. Thank you ‘D’.
Num Kom

Num Kom is a Rice Cake made with the outer shell of Sticky Rice with a filling of coconut and palm sugar, wrapped in banana leaf and steamed.

Originally palm sugar is used as sweetener. Since I did not have it, I substituted with the home made jaggery syrup which was available. Incidentally, when I made modhakam/poorana kozhukkattai on pillayar chathurthi, there was no jaggery at home as well in the Indian shop I get it from. I could only palm sugar instead. It was meant to be this way I suppose – Indian Kozhukkattai (Rice Dumplings) substituted with palm sugar and Khmer Kozhukkattai (Rice Cakes) with jaggery.

I. Preparation of Outer Shell/Rice Covering

We decided to go for the traditional method of soaking rice and making a paste. The paste is strained in a netted cloth and the water content remaining in the paste would go. Then, hot water is added to somewhat dry dough to make it easy to wrap the filling inside. 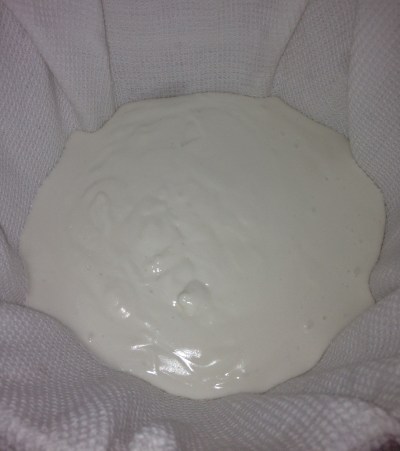 This was a flop with the cloth I had was thick and could not strain the water away.. Emergency!!!  Got some glutinous rice powder and mixed it with the rice paste and converted it into the required right consistency to make Num Kom 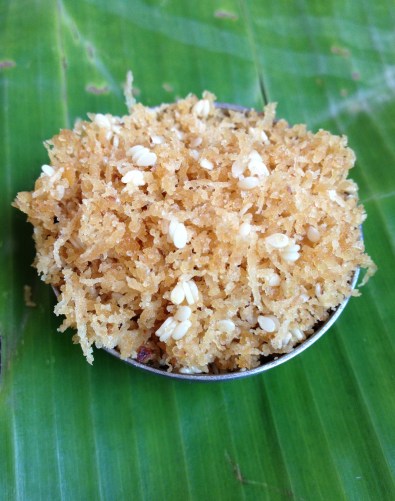 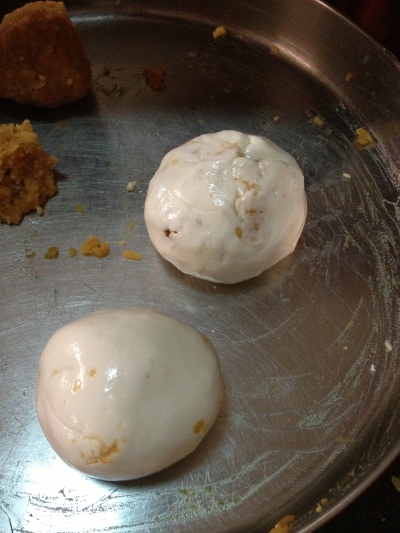 2. Wash the leaves well and wipe them clean with cloth

3. Fold each leaf vertically and give it a slightly cross cut 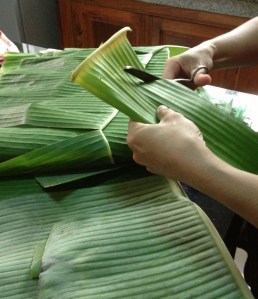 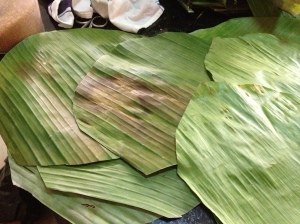 5. Fold it vertically – one fold 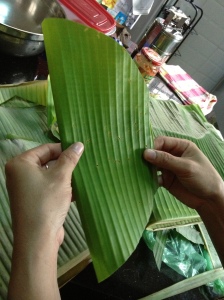 7. There would be two pockets – open the wider pocket

8. Grease the leaf and place the Rice Cake inside

9. Do not close it the same side where the leaf looks ‘V’ – but, fold the leaf to close the cake in the middle portion where there is a double slit – now, this is a tricky part I forgot to capture. I was learning to close it and was quite successful too. But no photos please. Shall try again for sure!

10. Done and the cakes are ready to be steamed. 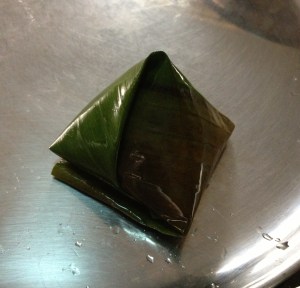 place the rice cakes randomly in the vessel 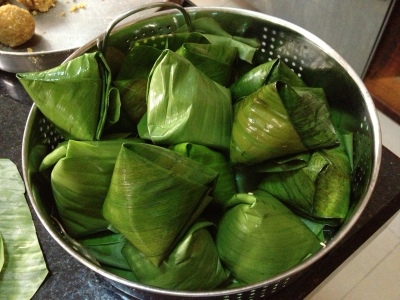 Sounds so similar, feels so familiar – yet so different! This holds good to the cuisine connections of Cambodia and South India! Shall explore more…

Vella-k-kozhukkattai is the sweet rice dumpling. Vellam means Jaggery in Tamil language and Kozhukkattai is Rice Dumpling. The taste of coconut and jaggery blended with cardamom powder tastes heavenly and is versatile in south indian cooking.  It can be made as Poorana Kozhukkattai/Modhakam, Poli – sweet stuffed chappathis (poli-a-different-story/) or non-stuffed plain-mixed rice dumpling, which is what I am writing about today – Vella-k-Kozhukkattai!

This steamed rice dumpling has the simple mix of grated coconut, jaggery and cardamom powder with the core ingredient – rice flour. This is yet another version of ‘Pidi Kozhukkattai’ – Given the shape by pressing with hands! This can be a healthy snack for children any time – and what more those little hands can make their own shapes and munch them too!!

For the initial procedures of grinding rice flour and roasting it to be ready to make dumplings – please see https://dosaikal.com/2013/07/29/pidi-kozhukkattai-karamsalted-rice-dumplings. We directly move on to make the dough ready for kozhukkattai.
Vella-k-Kozhukkattai/Steamed Sweet Rice Dumplings(with Jaggery) 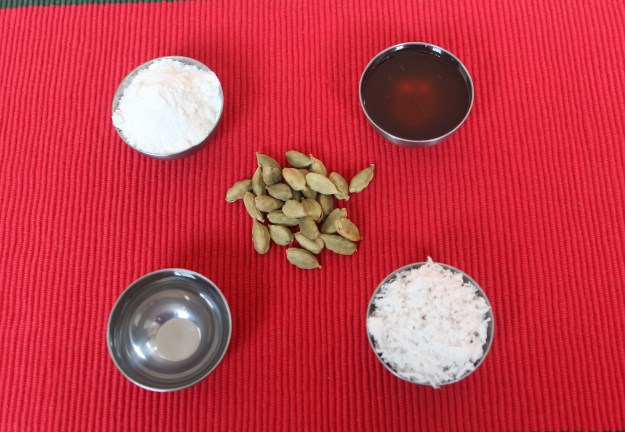 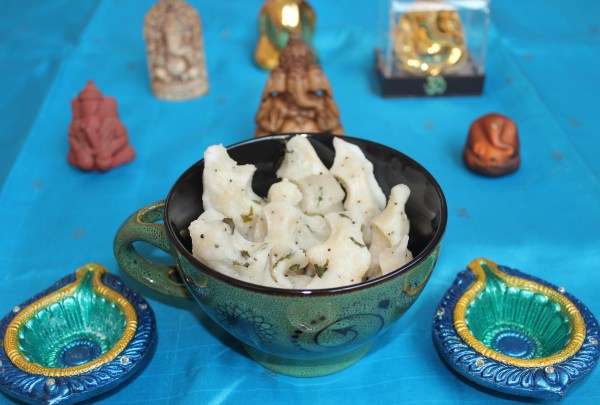 Kozhukkattai is a steamed rice dumpling made sweet or salt. We had already seen the stuffed version of Kozhukkattai before – (https://dosaikal.com/2011/09/14/modhakam-pillayar-chaturthi-special). Poorana Kozhukkattai or Modhakam has the filling of coconut and jaggery inside, and are steamed till done.

These Kozhukkattais are called PIDI KOZHUKKATTAIs,  as they are given their shape with hands. ‘Pidi’ in Tamil means ‘to hold’. They have no filling inside but several ingredients are mixed to the ground rice flour to be made into a dough. The sweet or salted dough is shaped into beautiful dumplings by pressing with fingers. These are also called Uppu Kozhukkattai which means salt dumplings.
About Kozhukkattai…

Kozhukkattais can be an evening snack on weekends after a lazy nap;

a healthy snack when kids come back from school, hungry to fall prey to some junk food;

why not…. can be a wonderful finger food/starter in a dinner served with any spicy chutney (https://dosaikal.com/category/chutneys).

Ko-ZHU-kkattai – ‘Zhu’ is not pronounced ‘su’ or ‘zu’. The word is not pronounced kozukkattai. ‘ZHA’ is the twisted tongue version of ‘la’. The tongue is twisted towards the inner portion of the upper jaw to get the sound of ‘zha’. This letter ‘ZHA’ is the speciality letter of Tamil language. Malayalam also has the letter as it is the latest language to have parted from its elder sister – Tamil. Malayalam still possesses some authentic and long forgotten pure words of Tamil Language.

The word TAMIL itself is pronounced ‘TAMIZH’. For easier comprehension and pronounciation, it is written as TAMIL. The people – the Tamils – are proud of their speciality letter – but is that anymore – only Tamils/Tamizhs can answer!?

Why am I posting the Uppu Kozhukkattai so soon?  There is a special reason behind it.

June and July were summer holiday months in Cambodia. Now, with a six year old getting bored at home, I had to make some arrangements to keep her busy… yet interested! Myself and my daughter charted out a time-table for seven days of the week – Arts, Music, Chess, Maths, Tamil language, English Writing, Swimming and COOKING! We baked some cakes, made some potato snacks and not to mention those flop cookies which were burnt!

And when I had to think hard of something which is easy as well as healthy for kids to make and munch, these Kozhukkattais came in. It is such a pleasure to see her write her own recipe book with her cookery class recipes. We made both the salt and sweet version of rice dumplings. 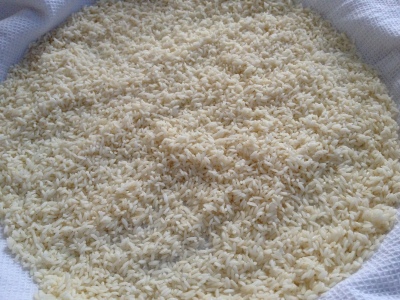 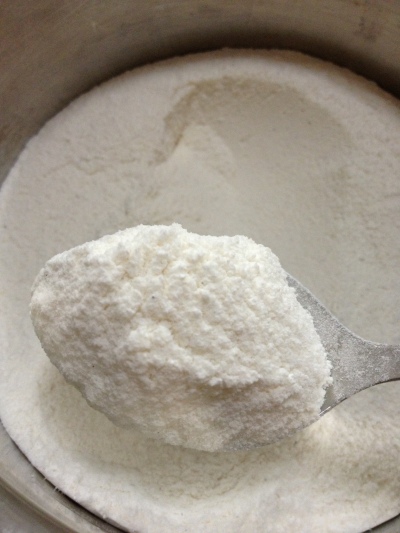 The basic ingredient for the dumplings is the rice powder, made from Raw Rice. Kozhukkattais taste best with freshly ground rice powder. This is how I made it –

ready to be steamed 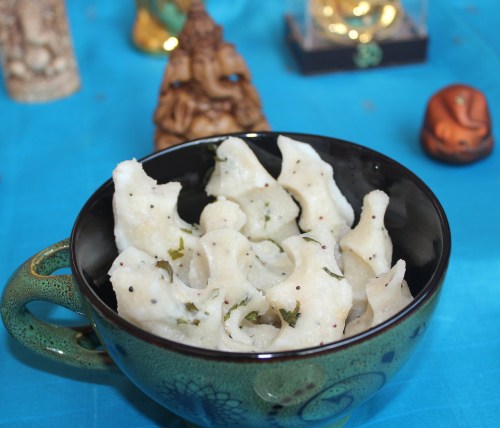