Wishing you all a very happy and success filled NEW YEAR 2013! Thankyou for being such wonderful readers. For me.. each one of you have made this world a delightful arena to share my thoughts.

For those who would have wondered why there has been no news for quite some time.. I was busy planning, listing, shopping and packing my groceries, clothes and other necessary and unnecessary stuff to carry to my next destination!

Leaving some beautiful memories behind in Thoothukudi and Chennai (apart from those special moments I’ve brought with me..), here i am, in my new place, slowly trying to settle down.  New house, New school for my daughter, New shopping area, New vegetable market,  everything new, except for the same old cooking….. idlies, dosais, chutney, sambar, rice, kuzhambu and the normal list of courses that follow in line! But a new kitchen.. with bare minimal utensils, those of mine yet to arrive from the Netherlands.. I have managed a few clicks this time!!

It was Pongal time! Sankaranthi to other states and Thai Pongal to Tamilnadu!! (https://dosaikal.com/2012/01/13/thai-pongal-the-harvest-festival/)

In this new new new life, number one – I mis-calculated the date of Pongal and thought it was on the 15th of January. When I called home to ask for the vegetables for AVIAL – a special down south vegetable dish to make on Pongal day, I had a shock that it was actually the festival Pongal the same day!! Number two – With some other programmes to attend, I decided I would celebrate Pongal on 15th… not to stop the rice boiling ritual that is exclusive part of Pongal celebration. The word ‘Pongal’ itself means ‘to boil’. Paal Pongiyaacha? means has the milk boiled? Here, the sweet jaggery rice made on the day of the festival Pongal is called Sarkkarai Pongal meaning sweet pongal.

There would be two Paanais/vessels. One with plain white rice and water and the other with plain white rice and when it boils, jaggery is added to make Sarkkarai Pongal – the sweet jaggery rice – the delicacy associated with the festival. When the new rice boils and spills over the paanai, women of the house say – ‘Pongalo Pongal’ in chorus. https://dosaikal.com/2012/01/13/thai-pongal-the-harvest-festival/

This time, instead of the pressure cooker pongal, I had brought a steel Paanai to make my Pongal celebration.


steel paanai and jaggery in the adjacent bowl

15th of January is the third day of the four day Pongal celebration. First day being Bhogi – cleaning of house and shedding away old unwanted things; the second day is the harvest festival or the thanksgiving to farmers – this Pongal day is the first day of the month of Thai; the third day is Maatu Pongal – thanksgiving to cattle that help in harvest; the fourth day is Kaanum Pongal – the Picnic Pongal!!

As such, when we were young, my mama (maternal uncle) would always ring us up early in the morning on Maatu Pongal day, to wish us Happy Maatu Pongal – a teaser for kids. So Mama, this time I go by your words… I truly celebrate Pongal on Maatu Pongal Day!

So now, in the capital of Cambodia – Phnom Penh, when I saw those sugarcane juice shops which extract fresh juice like those in chennai, I felt delighted… Now, i was in a country where I could buy sugarcane, which is an inseparable ingredient for the true taste of pongal festival. I bought two to keep on either sides of my house entrance. 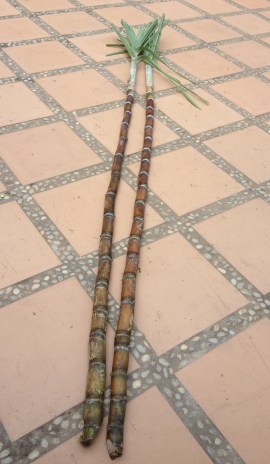 and later, the transformation till it reached everyone’s taste buds….. 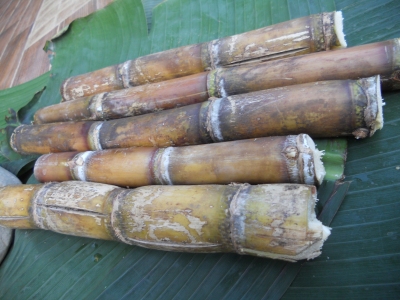 Next, I had to hunt for those harvest vegetables … The traditional, indigenous ones grown inland! My grand plan was to make AVIAL – the humble yet classy dish of Tamilnadu and Kerala.

Avial is a sumptuous combination of all indigenous (ofcourse carrots and beans have become part of it) non-watery vegetables, harvested during the season… made to a semi gravy consistency with the addition of curds and coconut-chilli-cumin paste. Vegetables like ash guard, bottle guard are not used as they shed water while cooking and would hinder the consistency of the dish.

I went to the big kaaikari chandhai – vegetable market in Tamil.. which we had explored couple of days ago and got lost while searching a way to come out. Where all vegetables, fruits, unknown varieties of meat and fish (remember I am still a beginner especially a recently converted non-vegetarian!), freshly grated coconut and many small eateries serving various other unknown food varieties, which I need to explore in the near future!

the ones I could get

I found a few of those I needed … I could not get yam … wasn’t available. Even if they were, I have not yet learnt the differentiation! Others that I missed but can be added in Avial are Avarakkai – Hyacinth Beans, Murungaikkai-Drum sticks, Pudalangai-Snake Guard. 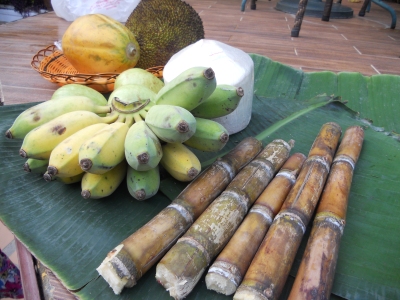 (bananas, guavas, sugarcane, papaya, tender coconut and jackfruit…  and Oh!! I missed those beautiful yellow mangoes kept in the fridge).

Now, before coming to the recipe of Avial… festive sweet of the day – my Sarkkarai Pongal- this time the authentic pacharisi (raw rice) and vellam (jaggery) in the pongal paanai, without the addition of split green gram. https://dosaikal.com/2012/01/13/thai-pongal-the-harvest-festival/

Though delayed by a day, I tried making a simple feast meal with mangai -raw mango sambar (https://dosaikal.com/sambar/) and thoothuvalai rasam ( SOLANYMTRILOBATUM) a herb found in many kitchen gardens.. I got the dry powder from my naatu marundhu kadai- traditional tamil medicine shop.  (Rasam is a thin soup not used as an appetiser as popularized outside the south of India and abroad, but is a digestive soup. https://dosaikal.com/2011/10/14/thamizhar-virundhu-feast-of-the-tamils/). For the side dishes, Keerai/Spinach Kootu  (a stew of vegetables) and pappali kai/raw papaya poriyal (dry vegetable curry) and AVIAL.

11 thoughts on “Pongal in Cambodia with AVIAL!”