Thirukkarthigai was celebrated yesterday – 25.11.15. This is one of the ancient festivals of Tamilnadu and originally the Festival of Lights. It calls for decorating the house with lamps. A detail post on thirukkarthigai was written in 2011. Refer – dosaikal.com/thirukkaarthigai
There are various sweets prepared for different festive occasions- it can be a mix and match affair as far as the sweets are concerned. But there are certain specific delicacies for specific festivals. ‘Pori’ or Puffed Rice forms a basic part of Thirukkaarthigai. It takes the name of the festival and is called ‘Kaarthigai Pori’. 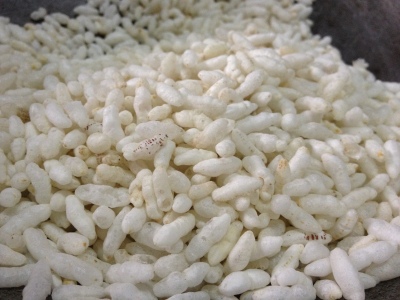 In the previous post on Thirukkaaarthigai or Kaarthigai Deepam, I had tried Pori Urundai or Puffed Rice Jaggery Balls but had not been successful. Hence, it was converted into uthiri pori or sweetened puffed rice.

This time I was successful and could make Pori Urundais because of the right consistency of jaggery syrup.Graduating from a learner to a better learner, this time ‘Maavilakku’ or the lamp made with rice flour also came out better shaped, certified ‘good’ by my daughter. What else one needs as good marks from your child! 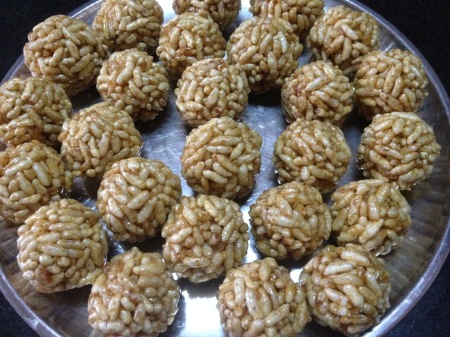 6. When the syrup reaches proper consistency, pour into puffed rice bowl and mix well with a ladle

7. Adjust the quantity of puffed rice according to the syrup