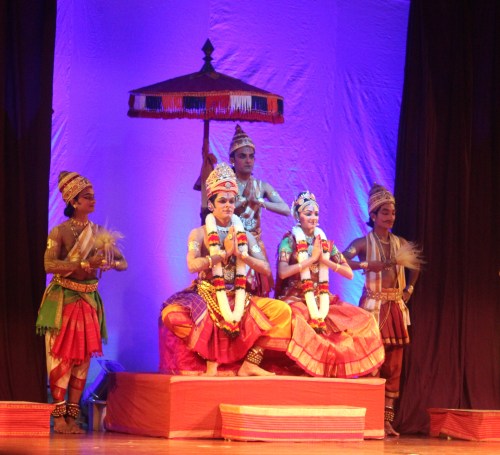 The Embassy of India and the Ministry of Culture, Government of India recently hosted The Festival of India in Cambodia. There were two events held in February. One the Buddhist Festival with a Buddhist themed photo exhibition and the other, Ramayana Classical Dance Performance by the world acclaimed and well esteemed Kalakshetra Foundation, Chennai. 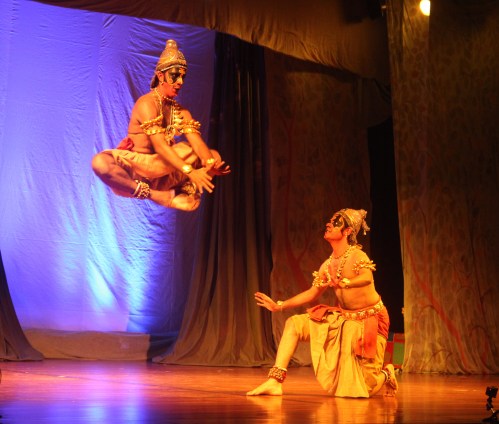 Kalakshetra was established in 1936 after the extraordinary success of Rukmini Devi’s first performance of Bharata Natyam at the Theosophical Society, in Adyar, a suburb of Madras, in the South of India. The founding members, Rukmini Devi, her husband George Arundale, and their associates at the Theosophical Society, were deeply committed to Theosophy and an arts academy was an extension of this commitment. The academy was also symbolic of the struggle for India’s independence; it was to culturally revive a country that was losing its identity under British rule. http://www.kalakshetra.net/history_1.html

Rukmini Devi founded Kalakshetra in 1936. She devoted the next fifty uears – until her death in 1986 – to this institution, now India’s premier dance school. It focuses on bharatanatyam, carnatic vocal and instrumental music, the visual arts, traditional crafts, textile design and heritage, besides history and philosophy. 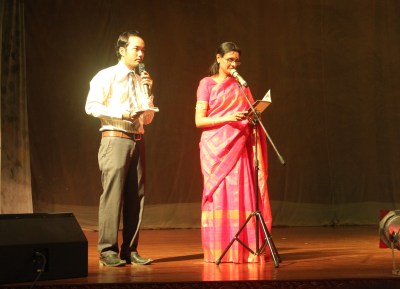 The Dancers, Vocalists, Instrumentalists and the very important Behind the Screen Technical Artists arrived as a crew with the Director of Kalakshetra,  Priyadarsini Govind a renowned dancer herself. She is immensely respected for her gentle blending of traditional dance with new choreography. Her inseparable talent has loaded her with numerous awards and honours, among which are the Prestigious ‘Kalaimamani’ title by the Government of Tamilnadu in 1998 and ‘Yuva Kala Bharathi’ in 2000.
Ramayana on Stage

The classic dance drama, not only showcased the rich cultural and artistic heritage of India but also served as a connecting link between many of the Asian countries. Ramayana is popular in various parts of south east asia, where the epic is adapted according to the country’s culture and life style. Even within India, Ramayana in each language, adapted from the original Valmiki Ramayana, has unique features of the respective territory.

As in many oral epics, multiple versions of the ramayana survive. In particular, the ramayana related in north India differs in important respects from that preserved in south India and the rest of south-east Asia. There is an extensive tradition of oral storytelling based on the ramayana in Indonesia, Cambodia, Philippines, Thailand, Malaysia, Laos, Vietnam, and Maldives. Father Kamil Bulke, author of Ramakatha, has identified over 300 variants of Ramayana. http://en.wikipedia.org/wiki/Ramayana

Here in Phnom Penh, Guests from various countries thoroughly enjoyed the rendition and felt the connect. 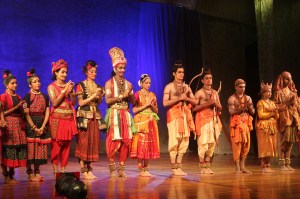 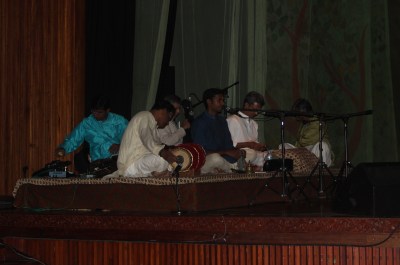 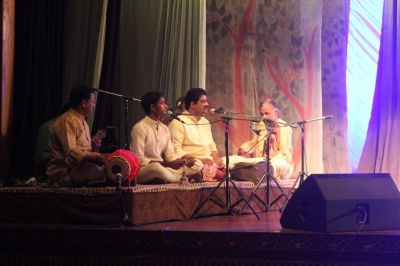 The Performances were a class apart, with the incomparable discipline in the steps and outstanding co-ordination of movements, the super speciality of Bharata Natyam.The traditional way of having the vocalists and instrumentalists on the side stage, with live music was another feather on the cap!

Rukmini Devi based her production largely on Valmiki’s classical version, but had made minor differences in the sequence of events. In her own words –

There are certain fundamental differences between Valmiki, Kambar and the great Ramayana poets. There is no definite mention in Valmiki of Surpanakha transforming herself into a beautiful maiden in order to tempt Sri Rama.
We are also accustomed to think Ravana lifting Sita with the part of the earth on which she was, to protect himself from magnetism which was like fire, destroying him. This is not so according to the Valmiki version, which says Ravana lifted her physically.
I have made slight differences in the sequence of events for it is important to think of what appears best on the stage. – Rukmini Devi Arundale

The performances were done under three themes, one on each day –
1. Jatayu Moksham
2. Choodamani Pradhanam
3. Mahapattabhishekam

These are some of the pictures which would explain the sheer beauty and poise of the dance and the stunning stageappearance and the almost real characters on stage!

In Tamil, names have the suffix  ‘an’ for male names as raman, lakshmanan, bharathan and ravanan; and here ‘ai’ for female names as in seethai and surpanakai. As I am comfortable in addressing the characters in the Tamil version, the names are mentioned likewise.
1. Jatayu Moksham

For info on the topic, I found this blog – http://ramayanainfo.blogspot.com/2010/06/jataayu-moksha.html%22 helpful. 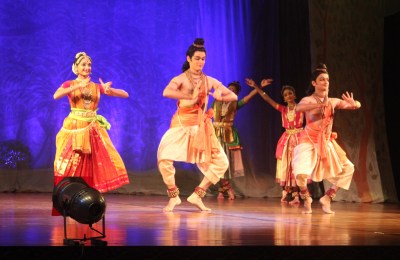 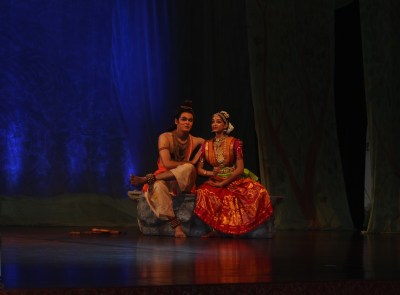 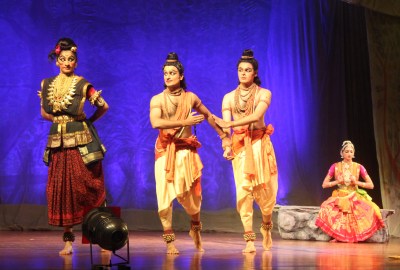 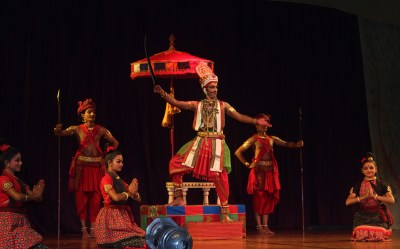 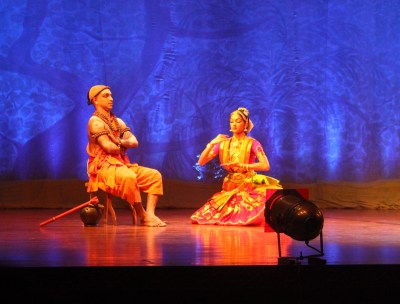 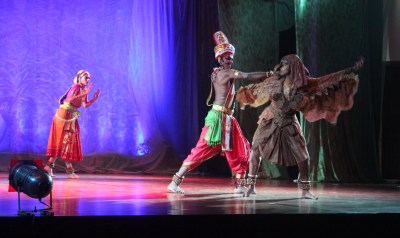 Please refer http://srimadramayana.blogspot.com/2007/04/choodamani-pradanam.html for the story of the episode. 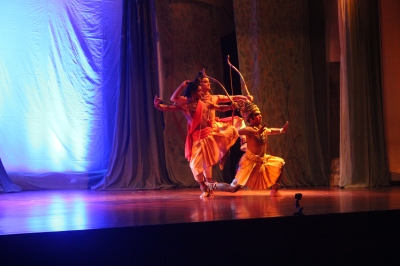 war between vali and sugreevan 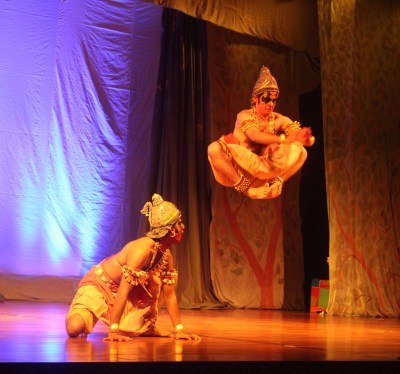 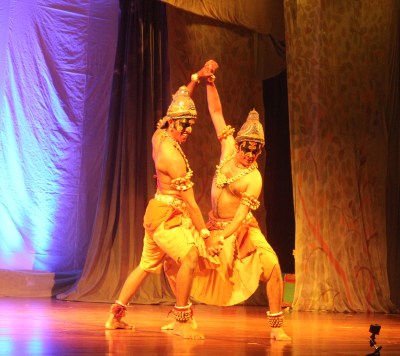 hanuman watches the pathetic state of seethai from behind the bushes 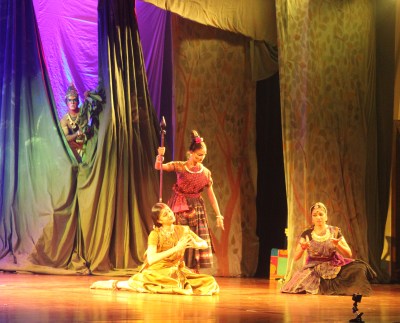 seethai hands over her ornament to hanuman 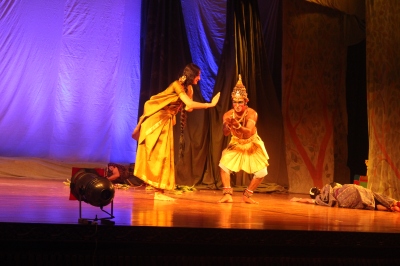 Read http://www.kalakshetra.net/maha_pattabhishekam.html for details of the story.

war between raman and ravanan 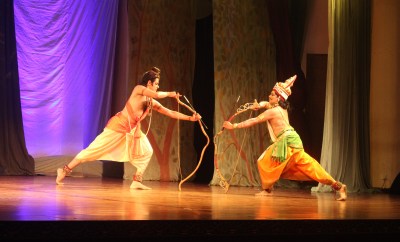 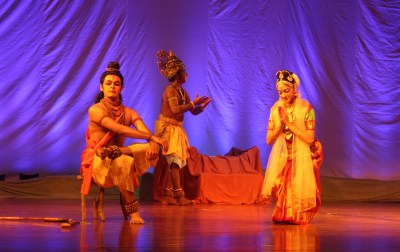 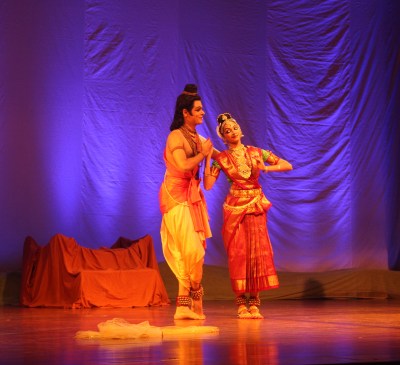 raman and seethai arrive for the coronation 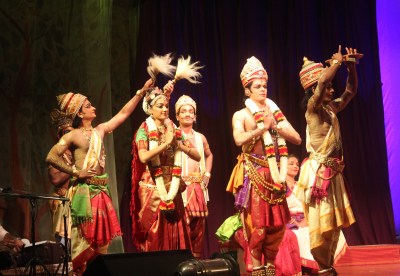 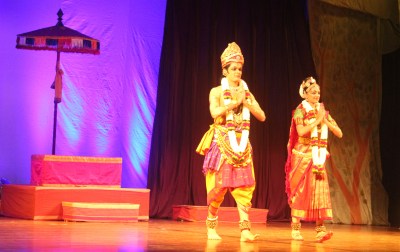 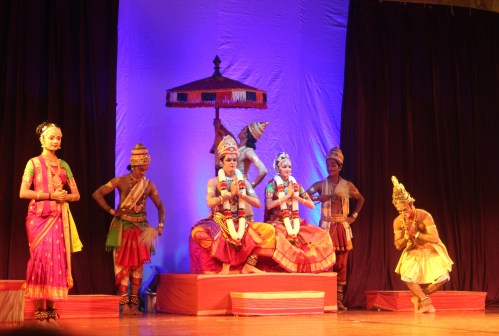 Crisp Steps of ‘Bharatha Natyam’, co-ordinated with other forms like ‘Kathakali’ made the performance an undoubtedly unique affair. The make-up, jewellery and the importance given to costumes gave a feel of a celestial wonder!

The verses sung were in Sanskrit from the original Valmiki Ramayana. Yet, the translated version which was displayed continuously on side monitors helped in comprehension of the scenes better.

Committed to artistic excellence whether in classrooms, in auditoria or during tours around the world (as a performance company), Kalakshetra productions are widely recognized for their in-depth research, impeccable technique and refined aesthetics.

Formerly, the Buddhist festival was held at Wat Ounalom, with the Himalayan monks performing Lama Chanting, a specialized form of chanting that produces multiple distinct pitches simultaneously. The monks also created sand mandalas and butter sculptures showing an innovative version of Buddhist worship medium. A photo exhibition named Dhamma Dharshan portrayed various aspects of Buddha’s life and the eight important places in the life of Buddha – the venues located in India. It was surely a wonderful journey and a unique experience of knowledge gaining of the great Man’s life under one roof.

Still in store – a Food Festival and Film Festival are also being organized here in Cambodia in the month of April, as part of the Festival of India. Surely the True Flavor of India!